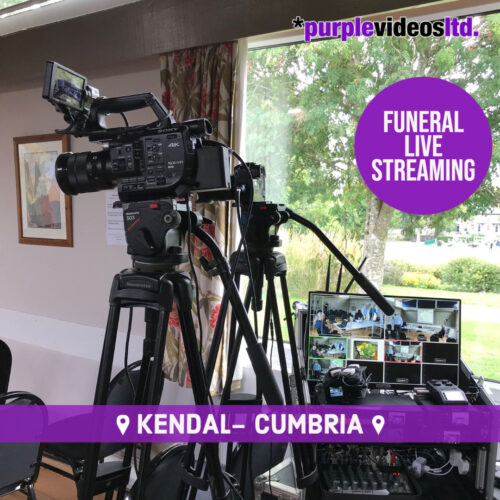 Back in the summer of 2021, I had the honour of Live Streaming a Memorial service in Kendal, Cumbria.

With Covid causing the cancellation of many events, this memorial service was planned months in advance and thankfully, restrictions had eased by then. However, many people were still unable to attend due to ill health or shielding, so I was asked to provide the live stream / webcast.

The event took place in a community centre and I used 3 cameras to stream it, as well as showing old pictures and slides via Powerpoint. As usual, I installed microphones to ensure everything could be heard clearly.

Here’s a glowing review left by the organiser of the event:

Andrew filmed a memorial event with a gathering of about 35 people in a small hall, for live transmission and then available with a link and password.

All his communication before and after the event was clear, sensible, helpful and sensitive. He arrived on time and set up quickly and efficiently, never having seen the venue or the layout, before the first guest arrived. During the proceedings he was very unobtrusive; people afterwards said they hardly noticed he was there.

The resulting video is excellent. Both picture and sound are extremely clear. The camera-work, taking in speakers, audience and projected photographs (which he incorporated from a memory stick), is well chosen. It’s remarkably successful, considering Andrew had to improvise throughout, with no possibility of retakes, constantly responding to the event for a full hour, as well as filming 15 minutes of guests arriving and again of people mingling afterwards.

Those who watched it online, live or later, have said it was almost like being there – much more than just a substitute for attending in person. E.g. “It was lovely to watch and feel a little bit part of the memorial.” And “Thank you for providing a way for non-attendees to feel a part of things.” And, from a close relative, “It felt very important for those who couldn’t attend to feel so included; we really did feel part of the memorial. It felt like joining in and we hadn’t expected that.”

Finally, just to note that his fee seemed perfectly reasonable.

If we can be of service to you, please have a look at our dedicated Funeral Live Streaming page here.