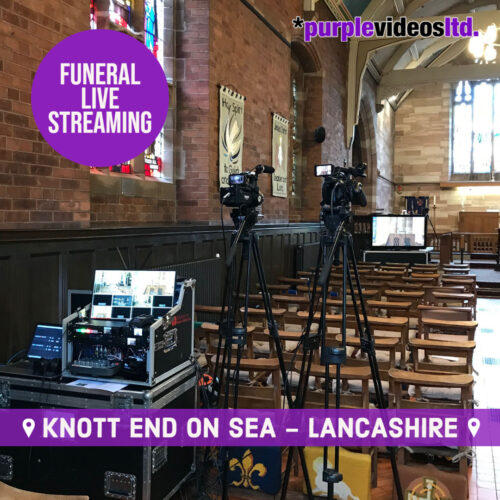 I was asked to help provide the Live Streaming of a funeral in Knott end on sea near Pilling in Lancashire.
I was also asked to play a video over in the church which family from overseas had put together as a tribute – I set up a 50″ Plasma TV and a speaker to play this on.

I set up 3 video cameras for the webcasting and also installed microphones to give great quality sound.

Many of the family live in Australia and were able to watch the funeral live stream from their own homes.
There were also other people watching from all over the world – This is what they had to say:

“You provided a terrific service. The funeral was watched in England and in Ireland, France, USA, in three states of
Australia, in Wales and in New Zealand. Feedback has been really positive and fulsome.”

It was good to work with Moon’s Funeral directors based in Preesall.

If I can be of service to you with any aspect of Funeral Live Streaming or Funeral filming, please have a look at the dedicated funeral Webcasting page here. We cover Lancashire, Cumbria, Greater Manchester and Liverpool.